Born Julia Ultardottir, Jules (she/her or they) is a non-binary Dwarven rogue, standing 4'6 with the stocky build typical of her kind, though years as a message runner has built a leaner, more wiry musculature. Her long, curly red hair is generally unkept, pulled back from her green eyes and secured in a loose half-up ponytail with leather straps. It is matched by her prodigious red beard, which extends to a scruffy point at her clavicle. She is 26 and the only child of Julia and Ultar Ultarson, owners of the Greencrack Copper Mine on the Thorimfel Plateau, a region high in the Redfall mountains.

Jules spent her youth as a runner, quickly moving messages and deliveries for her father’s company and its clients, and later acting as escort for trader caravans moving in and out of Whitebridge. Her rogue training began then, and by the time she left Whitebridge in her late teens Jules was a formidable practitioner of two-weapon fighting, notably favouring throwing daggers.

Julia Ultarsson, wife of Ultar, died when Jules was just 17. Jules' grief took on an outwardly rebellious attitude, quick to anger and eager to provoke a fight. She left home a few months after, and didn’t return to Whitebridge until the age of 23. Jules doesn’t talk about her time away, but upon her return she announced her non-binary status to her father, took the name “Jules,” and began working for the Mine, overseeing operations. No less argumentative, she quickly gained a renewed reputation in Whitebridge, putting newly-acquired skills as a thief, lock-breaker and smuggler to build a quietly grey economy in the town. This led to frequent antagonism with her former childhood friend Elres, now captain of the Whitebridge Militia. Anyone attempting to pursue questions about her activities quickly meets the end of a fist or a point of a dagger, however.

When Jules was 26 Greencrack Copper Mine was overrun by Kobolds in a sudden incursion. The workers were imprisoned, the doors shut and all communication with the mine ceased. The leaders of of Whitebridge debated what to do for several days; Jules became frustrated at their inaction and snuck into the Mine in an attempt to rescue the trapped miners. She was captured herself, but together with a group of adventurers helped lead a jail break that saw the captured miners freed and the kobolds destroyed.

Following the events of the Liberation of Whitebridge, Jules has taken up a position in the royal household of Whibraxis, the newly-declared dragon king, for whom she acts as advisor, messenger, and spy. 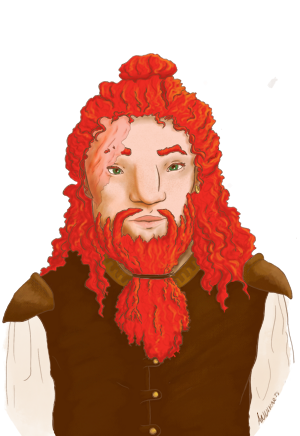